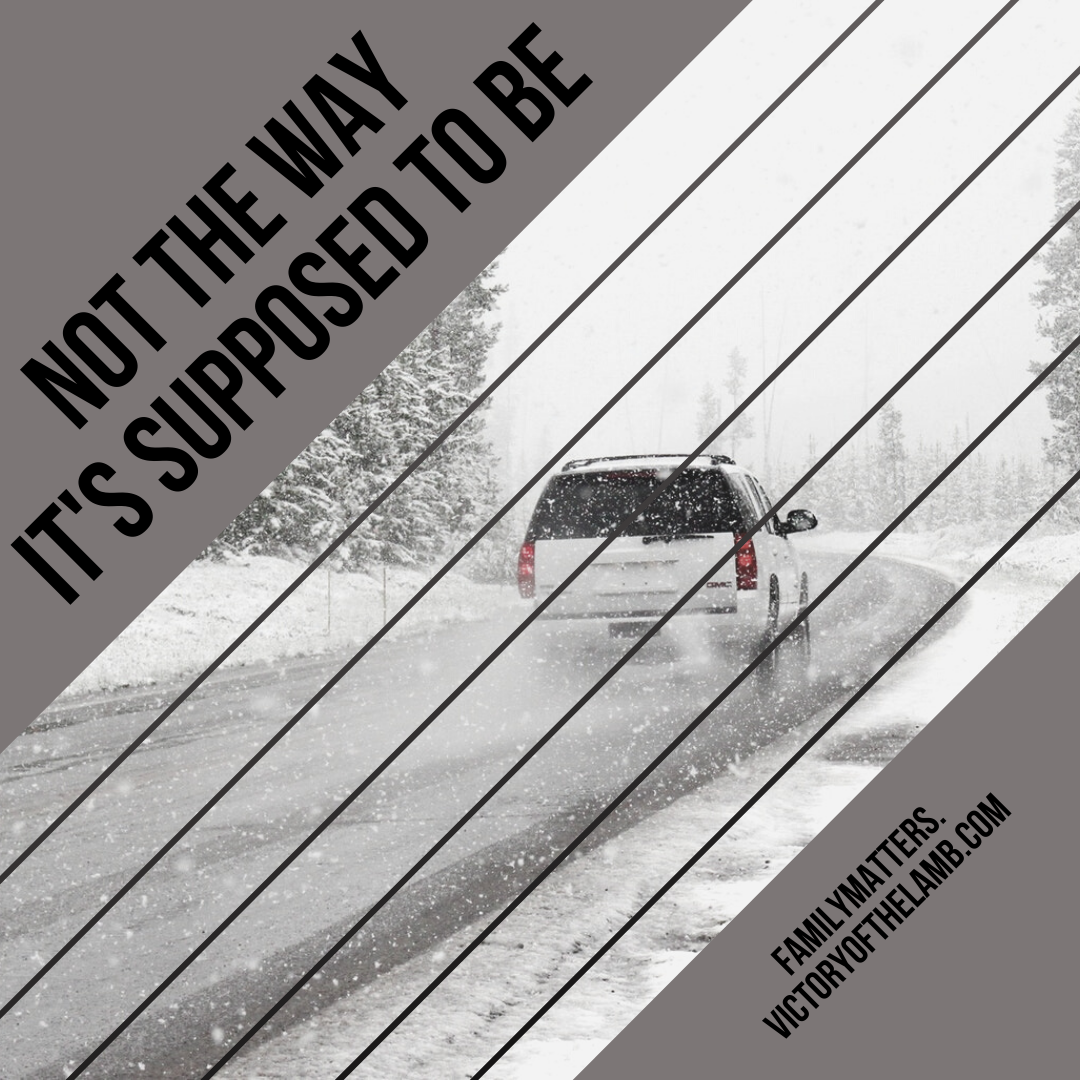 “Therefore, just as sin entered the world through one man, and death through sin, and in this way death came to all people, because all sinned.” (Romans 5:12)

Recently, on a solo road trip that was supposed to go smoothly but got complicated by snow, I witnessed a roll-over accident. In the slippery conditions inherent to Midwest winters, a driver lost control on a patch of ice.  The person rolled their vehicle into the ditch and up into oncoming traffic. Right in front of my eyes.

Feeling the panic growing in my chest, I pulled off at the next exit and got my vehicle safely to the side of the road. Once in park, I completely lost it. I called 911 to make sure first responders were on their way, and then I sobbed over the phone to my husband. After several minutes of crying and shaking uncontrollably, I was calm enough to drive again. But, when I think about this, I still find myself shaking.

Unexpected or Expected… It Still Hurts

Why is it that events like this shake us to our core? Mass shootings make us hold our loved ones tight. Natural disasters make our hearts ache for those who lose their homes, or worse. Funerals are full of tears for those mourning those who have died. Whether it’s an expected loss or sudden, it still hits us like a ton of bricks. But why?

I think it comes down to one idea: this was never the way it was supposed to be.

It Was Supposed to be Good, But Now It’s Not

At the start of the book of Genesis, God creates everything in the Heavens and on Earth, including people. And how does that go? God saw all that he had made, and it was very good. And there was evening, and there was morning—the sixth day (Genesis 1:31). It was all good!

But then, enter the serpent. You probably know the story, but things turned sour when Adam and Eve ate from the Tree of the Knowledge of Good and Evil. They had ONE command from God that was for their own good. As Pastor Steven Furtick explains, “The first command God gave to Adam and Eve was not of limitation but of liberation“.1 God was freeing them from the consequences of what they would know if they ate from this tree.

So now, with this fateful choice, God had to limit man’s time on earth: “By the sweat of your brow you will eat your food until you return to the ground, since from it you were taken; for dust you are and to dust you will return” (Genesis 3:19). Death wasn’t supposed to happen, but now it became the ultimate limitation for humanity.

As the Son of God and Son of Man, Jesus felt the weight of this sin long before he suffered death on the cross. Upon finding out that his friend Lazarus had died, John tells us, Jesus wept (John 11:35). Jesus had literally just finished telling Lazarus’ sister that he was going to raise Lazarus from the dead, and yet he cried at the sight of Lazarus’ tomb.

This part of scripture always baffled me. Jesus KNEW he was going to see his friend alive again in a matter of minutes, but he felt sadness anyway. I think it’s because it wasn’t the way things were supposed to be. Death and loss weren’t things his Father in Heaven had intended for humans to experience. And yet, because of sin, death is a reality we face throughout our lives.

When the first humans sinned against God, He didn’t just leave us to deal with the mess we’d made. Almost immediately, God assured Adam and Eve that He had a rescue plan for them: “And I will put enmity between [the serpent] and the woman, and between your offspring and hers; he will crush your head, and you will strike his heel” (Genesis 3:15). Jesus is the child of Eve who crushed the Devil, saving us from sin and death.

Just before Jesus was arrested, he told his disciples what was going to happen on the day we now know as Good Friday. And he comforted them with this: “I have told you these things, so that in me you may have peace. In this world you will have trouble. But take heart! I have overcome the world” (John 16:33). This message of encouragement from Jesus is for us too.

Not the Way It’ll Always Be

The book of Isaiah, a prophesy of the Savior Jesus, explains it like this: [Jesus] will swallow up death forever. The Sovereign Lord will wipe away the tears from all faces; he will remove his people’s disgrace from all the earth (Isaiah 25:8). As long as we’re on Earth before Jesus returns, things are going to be rough. We’ll face death, destruction, sadness, and anger.

But, Jesus was and is God’s rescue plan for us. Pastor Ben explains, “[When Jesus returns,] God is going to give us this life, but he is finally going to get all the stains out. All the ways that sin has stained this world will be eradicated. This world will be purified of death and crying and pain. The old way the world worked will pass away.”2

Things aren’t the way God intended them to be. But He used our sin, our messiness, and our weakness to display His mercy and grace through Jesus. When Jesus returns, all will be perfect again, just the way it was supposed to be.

2 thoughts on “Not the Way It’s Supposed to Be”