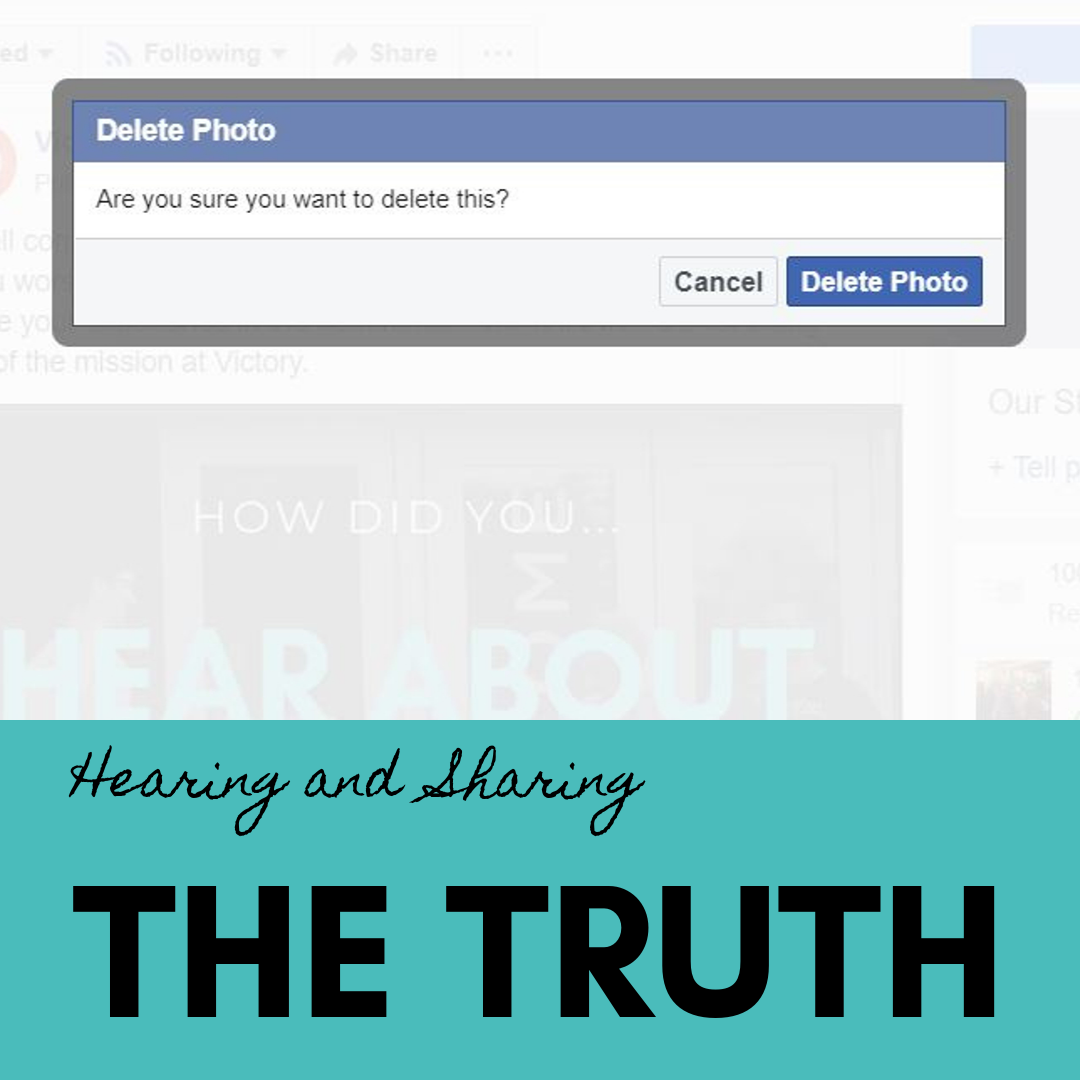 All Scripture is God-breathed and is useful for teaching, rebuking, correcting and training in righteousness, so that the servant of God may be thoroughly equipped for every good work. (2 Timothy 3:16-17)

We often talk at the dinner table about our day. Even if they’ve had a bad day, we ask our kids to honestly share what happened in their days. We’ve not had too many instances of lying, but when we’ve faced this issue, we’ve always told our kids: it’s best to tell the truth first, no matter how bad it is.

With little kids, issues with truth-telling are often fairly innocent. But it’s important for them to understand the power of truth, particularly the truth of the Gospel.

Hearing the Truth… Or Someone’s Version of It

Recently, I shared a post on my church’s Facebook page asking why people leave the church. It was shared by another organization and reached thousands of people, far more than we usually reach with our posts. We got some very honest, heartbreaking responses. So many responses, in fact, that we simply couldn’t keep up with the quantity. Not only that, but we weren’t prepared for the types of responses we got. The comments from some individuals got quite negative, and I eventually decided it was best to remove the post.

I hated doing it. The whole reason we posted it was to hear what people had to say. We wanted to hear people share about their experiences so we could reach people who have been hurt by the church. Some of their responses to my comments made me question my motives for the post. Did I really want to hear them, or did I want to show that our church is better than others? Did I need to share my two cents, or would it have been better to just acknowledge their experiences and thank them for their honesty?

Responding to Feedback – Good and Bad

After I got space and time away from the post, I was able to look back at the responses on the post and consider what I could learn from the post. While there were some harsh comments, there were some wisdom-filled comments too, both initial comments and responses to our comments. Psychologist Dr. Henry Cloud explains what constitutes a wise person: “[Wisdom] comes from experience, and to let experience do its work, a person has to be open to receiving the lessons that it has to teach. The person who ultimately does well is the one who can learn from his own experience or the experience of others, make that learning a part of himself and then deliver results from that experience base.”1 I needed to be wise enough to accept feedback from these comments, but also use discernment to figure out whose comments actually contained wisdom.

I also realized that, regardless of whether the comments were seated in wisdom or not, I responded to all in the same way. However, as Dr. Cloud explains, “You cannot deal with all people in the same way, but once you learn the character traits that give real reason to hope that they can be different, you can know better whom you want to invite into your tomorrow.”1  To learn from this experience, I chose to focus on those comments that showed wisdom and honesty, rather than ones which appeared to have the goal of demeaning or undermining what our church is trying to do.

One of the people who shared some comments like this reached out to us via direct message. In love, she told us some truths about her experience in church. She also gave feedback on my responses to the post that really led me to reflect on the whole process and plan for the future. Her goal was to create a dialogue in which she could share openly and we could learn in a way that would direct our planning for the future of our church.

No one wants to hear that things they said with the best of intentions may not have been interpreted as they were meant. It was hard to hear some of her thoughts, because it made me honestly reflect on my reactions to others’ comments. But the truths she shared were important to help our church continue to reach and love people, no matter what their background.

I know that this individual who reached out to us extended a ton of grace to us and took a huge risk sharing her story with strangers. Hearing the truth is hard, but so is sharing truth with others. Telling the truth is a risk, especially when it goes against what is popular. When you tell the truth, some might consider you judgmental. They might call you a hypocrite. So, you have to do some praying and self-examination before deciding when and how to tell the truth.

Jesus explains this self-examination in parable: “Why do you look at the speck of sawdust in your brother’s eye and pay no attention to the plank in your own eye? How can you say to your brother, ‘Let me take the speck out of your eye,’ when all the time there is a plank in your own eye? You hypocrite, first take the plank out of your own eye, and then you will see clearly to remove
the speck from your brother’s eye” (Matthew 7:3-5). Basically, you need to recognize and honestly deal with your own sins before you can help others recognize and deal with their sins.

Obviously, telling the truth is always best. But you can tell the truth in many ways, and only you can know of your motivation for telling the truth. Pastor Bill explains, “The difference between truth-telling and judging is that judging is bent on calling or thinking someone is a fool and truth-telling is bent on helping someone.”2 If your motivation is helping and not condemning, then you are making the right choice to tell the truth. So, if you’ve examined your motivation and you’ve decided you care too much about the person to let them continue down a bad path, pray about it… and then make a plan.

So, start with Jesus as you share the truth. What does He say in His word about this issue? It’s not about pulling Scripture out of context or throwing Bible verses in people’s face; it’s about knowing what God’s truth is on the issue at hand. You’ll want to set up a situation in which you can have an open, honest conversation with the person. Learn from my mistake: you can’t have deep spiritual conversations with strangers online. Change begins with face-to-face conversations between friends.

How to Tell the Truth

In a recent message about truth-telling, Pastor Bill shared four steps to telling the truth in love:2

1. Listen. Be a friend, and understand the person’s story. Talk less, and listen more. The conversation will likely be more of you asking questions than telling the other person anything.
2. Don’t label someone by his situation or sin. Put yourself in their shoes, and think about how you might react in the same situation. Resist the urge to place the person in a category or a stereotype.
3. Show compassion without condoning. On the social media post I mentioned earlier, there was a lot of conversation about “accepting” certain groups. You can show love and compassion to people without accepting the choices they make which you know to be wrong. Sometimes, the best way to show love is to set boundaries and point out inconsistencies.
4. Challenge without condemning. Introduce them to the person they can be in Christ. Tell them you believe in them. Show grace to the person by seeing their potential in Christ.

This might not happen in the same conversation as the first three steps. Don’t rush it, or you’ll ruin the relationship-building you’ve already done. Know the person before helping them know their sin.

Love and the Outcome

Hearing the truth is never easy. The initial reaction might be defensive, denying, or spiteful. I know mine was. But because of wise, loving way truth was shared with me, I could learn from this situation rather than become embittered by it.

Similarly, sometimes telling the truth is just plain awful. It’s not easy to say things that aren’t popular, just like it’s not easy to hear that you aren’t as perfect as you’d like to think you are. But hearing the truth might change the life and heart of someone straying from God. “Starting with Jesus means we would rather hurt someone’s feelings than their future.”2 As you struggle and pray about those relationships in your life that need some truth-telling, think of the long-term outcomes. How will this person’s life be impacted by a change for Jesus? And think of the eternal implications of not telling the truth. Don’t strive to tell it perfectly. Be honest. Be compassionate. And speak in love.

2 Limmer, B. (2019 October 13). When it’s difficult to be patient… judge with wisdom and grace. Start with Jesus message series. Retrieved from https://victoryofthelamb.com/sermons/when-its-difficult-to-be-patient-judge-with-wisdom-and-grace/.